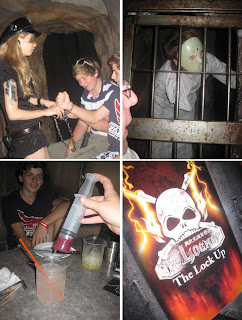 We got locked up last night, quite literally! We were invited to dine at the "fine" restaurant that is The Lock Up with Chris and Becky and their 14 year old son Edmund and his friend Jack. It is situated in the basement of a building in Shibuya and you have to pass through some dark passages where screaming skeletons jump out at you, to a holding area where a "prison guard" takes you to your table. I have to say, she seemed to have lost her skirt along the way! Anyway, I think Edmund and Jack thought they'd gone to heaven as she decided they needed to be handcuffed and led to their cell! We all followed and were taken down dark, cave-like tunnels to our room where the prison gates were slid shut and we were trapped for the evening. We had an array of cocktails to choose from with names such as "Frankenstein" and "Electric Shock". I chose one where you had to syringe a fluorescent red drink from a massive syringe into a laboratory beaker. Halfway through the night we got a visit from Jason's (Chainsaw Massacre) slightly-less-scarey cousin and a bunch of zombies, and then we went home!
Posted by Katie Gordon at 14:29

Katie Gordon
I am a textile designer and clutch bag maker and love to combine my two passions using fabrics that I have collected from around the world.